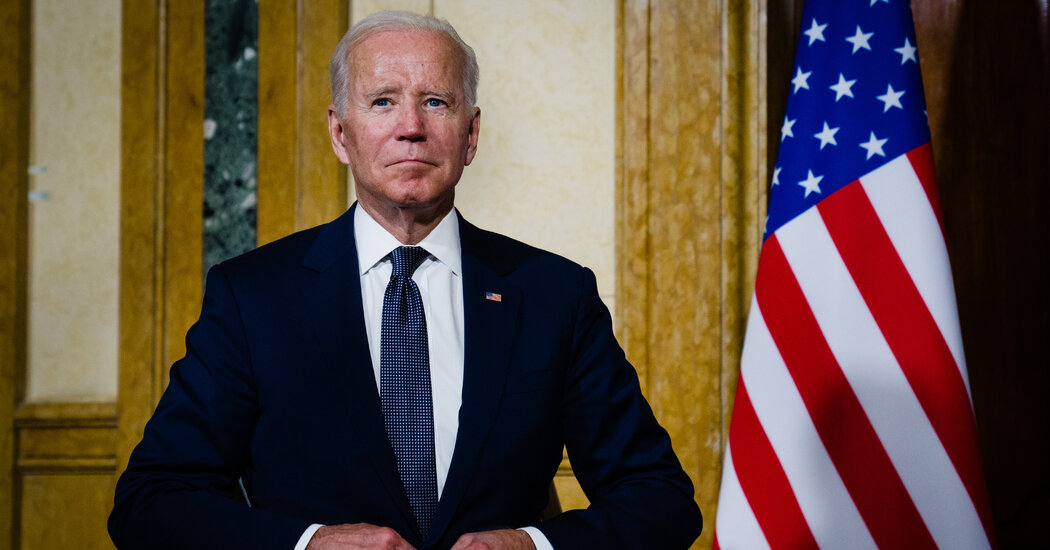 As the leaders of the world’s wealthiest nations gather in Rome for the Group of 20 summit in person on Saturday for the first time since the coronavirus swept across the planet, they will confront twin global crises that have an outsized impact on the poor: the peril posed by climate change and the continuing failure to provide equitable access to lifesaving vaccines.

“We are now in the second year of a global pandemic that has killed four million people,” U.N. Secretary General António Guterres, said in a speech before the meeting. “Extreme climate events regularly devastate vulnerable communities.”

“You have come together,” he said, “to determine the course of some of the most pressing issues we face: access to vaccines; extending an economic lifeline to the developing world; and more and better public finance for ambitious climate action.”

On Saturday, President Biden’s first major meeting of the summit will focus on economic policy and the pandemic, and he will then meet with the leaders of Britain, France and Germany to discuss ways to get the 2015 nuclear accord with Iran back on track, one of Mr. Biden’s most elusive diplomatic goals since assuming the presidency.

Mr. Biden’s advisers said he was counting on at least one economic policy victory from the conference: the blessing of a global agreement to set minimum levels of corporate taxation, aimed at stopping companies from sheltering income in tax havens like Bermuda.

Before Saturday’s meeting, health and finance ministers from the nations called for 70 percent of the world’s population to be vaccinated against the coronavirus over the next eight months — an ambitious goal that would require a sharp increase in the amount of vaccines made available for the developing world.

It would mean addressing the stark inequity that has resulted in G20 countries receiving 15 times more doses per capita than countries in sub-Saharan Africa, according to the science analytics company Airfinity.

The United States has pledged to donate more than one billion doses, the most in the world. And Mr. Biden, who often refers to his skills as a negotiator and his decades of foreign policy experience, will seek commitments from foreign leaders on other efforts to combat the pandemic.

But the promises of wealthy nations have repeatedly fallen short over the course of the pandemic.

So, too, have pledges by wealthy nations to address climate change. The urgency of the moment has been driven home time and again this year as nations struggled with flooding, fires and other extreme weather events.

The G20 meeting comes just before COP26, a worldwide summit on climate change in Glasgow that could be a make-or-break moment to save a warming planet.

While the gathering in Rome marks a departure from the largely virtual diplomacy of recent years, two leaders are noticeable for their absence: President Vladimir V. Putin of Russia and President Xi Jinping of China — who are staying home from the conference over Covid concerns.

Jake Sullivan, Mr. Biden’s national security adviser, told reporters traveling to Rome that the president considered those leaders’ absences not as an obstacle to coordination, but as an opportunity to showcase that Western democracies can work together to meet current and future threats.

Gita Gopinath, the chief economist at the International Monetary Fund, said the most urgent economic task for leaders at the summit was slowing the pandemic — in large part, she said, by making good on promises to ship vaccine doses to less wealthy nations.

“To truly end this health crisis and its accompanying economic crisis, we need to get to widespread vaccinations everywhere in the world,” Ms. Gopinath said.

As the Group of 20 summit of the world’s leading economic powers brings numerous global leaders to Rome, it is also drawing laid-off factory workers, climate activists, antiglobalization campaigners, unions, feminist groups, Communists and perhaps some vaccine skeptics and fascists to speak out in protest.

“There will be many of us,” said Gino Orsini, a representative for the Si Cobas union, one of the organizers of a demonstration planned for Saturday to coincide with the Group of 20 gathering.

This year is the 20th anniversary of the Group of 8 summit that Italy hosted in the northern city of Genoa that was marred by rioting. It is also a moment of tension between the authorities and opponents of the Italian government’s coronavirus vaccination requirements, which have resulted in violent clashes.

“The level of attention is maximum,” said Giovanni Borrelli, a local government official, adding that 5,500 extra law enforcement officers were being deployed this weekend.

Climate protesters briefly staged a sit-in on the main avenue leading to the G20 site on Saturday morning, but offered no resistance when the police forcibly removed them. And organizers of Saturday’s protests vowed that there would be no violence.

“It will be a relatively calm march,” said Lavinia Iovino, 15, a representative for the Italian branch of the international youth-led Fridays for Future movement.

She said they planned to urge the Group of 20 leaders to act urgently amid a time of unprecedented interest in climate change and social justice. “It’s the moment when we can do most,” she said. “What we don’t do now, we won’t be able to do in the future.”

The environmentalist march will be joined by workers’ unions and factory workers who are seizing the opportunity to voice anger at the elites. “It’s a protest against all the G20 governments who represent the part that dominates the world and exploits workers,” said Mr. Orsini, the union representative.

It was unclear whether vaccine opponents and neo-fascist groups would turn out on Saturday. But neo-fascist groups have joined recent protests over coronavirus vaccination requirements, and some of their members assaulted the headquarters of Italy’s biggest union on Oct. 9.

Since then, other threats to “take Rome” have drawn only scattered crowds. But on Facebook groups, opponents to Italy’s coronavirus health pass have threatened to participate in the protests.

“The situation and the moment are quite complicated,” Lamberto Giannini, the head of the Italian police, said at a news conference on Wednesday. “The narrative on the web is really worrying.”

The annual Group of 20 summit meeting, which brings together President Biden and other world leaders, is intended to foster global economic cooperation. But with so many top officials in one place, it also serves as an all-purpose jamboree of nonstop formal and informal diplomatic activity.

This year’s meeting takes place in Rome on Saturday and Sunday and is expected to cover issues like climate change, the global supply chain, the pandemic and the chaotic withdrawal of American troops from Afghanistan. If the members can reach consensus on such subjects, they will produce an official joint declaration at the end.

Here is a look at what the Group of 20 is and does, and some of the important things to watch during the two-day summit.

The Group of 20 is an organization of finance ministers and central bank governors from 19 individual countries and the European Union.

Established in 1999 after a series of major international debt crises, the G20 aims to unite world leaders around shared economic, political and health challenges. It is a creation of the more select Group of 7, an informal bloc of industrialized democracies.

Supporters argue that as national economies grow ever more globalized, it is essential that political and finance leaders work closely together.

Formally the “Summit on Financial Markets and the World Economy,” the G20 meeting is an annual gathering of finance ministers and heads of state representing the members.

It bills itself as the “premier forum for international economic cooperation.” The heads of state first convened officially in November 2008 as the global financial crisis began to unfold.

The annual summit meeting is hosted by the nation holding the rotating presidency; this year, it’s Italy.

What happens at a G20 summit?

It is focused on several core issues around which its leaders hope to reach a consensus for collective action.

The goal is to conclude the two-day gathering by issuing a joint statement committing its members to action, although the declaration is not legally binding. But one-on-one meetings can overshadow official business.

As world leaders prepare to meet for this weekend’s Group of 20 summit in Rome on some of the greatest challenges facing the global community, a dispute much closer to home for Britain and France is swirling in the background.

A growing disagreement between the two countries over post-Brexit fishing rights in the English Channel has become a focal point for the summit and is expected to be a topic of discussion for the nations’ leaders.

George Eustice, Britain’s environment secretary, told Sky News on Friday that Prime Minister Boris Johnson was likely to raise the dispute with President Emmanuel Macron of France during the meetings. A spokesman for Mr. Johnson said the pair will meet briefly during the summit.

Tensions have flared in recent weeks over fishing licenses. On Wednesday, France detained a British trawler near the port of Le Havre and fined two vessels. The French authorities have threatened further action beginning on Tuesday unless Britain issues licenses to dozens of French boats to operate in British waters.

Speaking to reporters on the way to the G20, Mr. Johnson said that he was puzzled by the escalation, but that his government would do whatever was necessary to ensure Britain’s interests.

“France is one of our oldest, closest allies and friends,” he said, according to the BBC. “The ties that bind us together are far stronger than the turbulence that currently exists in the relationship.”

France has said that British failure to issue licenses to its fishing vessels would renege on a post-Brexit agreement. Clement Beaune, France’s minister for Europe, said in a statement that unless the licenses are issued, the country will consider other retaliatory measures, like limiting the electricity supply to the Channel Islands, British dependencies off the French coast.

London has said that the French actions could violate international law. Liz Truss, Britain’s foreign minister, said in a statement that the government had summoned the French ambassador for talks on Friday “to explain the disappointing and disproportionate threats made against the U.K. and Channel Islands.”

The dispute has become increasingly heated as the two nations try to navigate a new relationship after Britain’s exit from the European Union. The fishing dispute even resulted in a short naval standoff in May.

Under a post-Brexit agreement forged in December, European fishers can continue to work in some British waters if they prove that they had worked in the area before Brexit, but France and Britain have locked horns over what documentation is required. Last month, Britain and the Channel Islands refused licenses to about 240 boats that the French authorities say have fishing rights under the agreement.

France has threatened to add extra measures, including checks and controls on other goods entering Britain from French ports, raising fears of further disruption to Britain’s already struggling transportation industry.