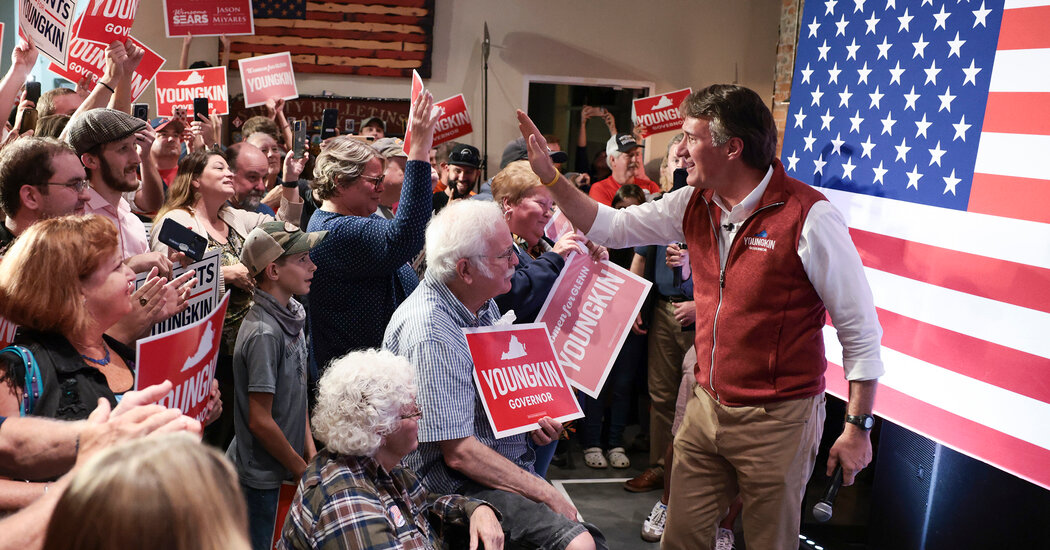 On Tuesday, the Virginians will vote to elect their next governor. The Democratic nominee is Terry McAuliffe, who was governor between 2014 and 2018, but was limited without a term. The Republican candidate is Glenn Youngkin, executive director of private capital and a newcomer to electoral politics.

In Virginia, where I grew up and where I currently live, there are real material issues at hand, from transportation and housing costs to the climate, economic inequality, and of course the Commonwealth’s response to the Covid-19 pandemic. The battlefield for these elections, however, is the culture, identity and specter of the previous president.

McAuliffe and his supporters want Virginians to feel that the vote for Youngkin is the vote for Donald Trump. “I competed against Donald Trump and Terry against Donald Trump’s aide,” said President Biden while speaking at a rally Tuesday night in Arlington. “We have a choice,” McAuliffe said at the same event. “A path that encourages conspiracy, hatred, division, or a path that focuses on the uplift of each individual Virgin.”

Youngkin, however, wants Virginians to know that a vote for McAuliffe is a vote for a “critical theory of race”. Not a legal discipline dealing with the distance between formal and de facto equality, but an idea spread by right-wing activists and their wealthy followersthat public schools teach a racist ideology of guilt and anti-white emotion. Youngkin’s unique message was that he would keep this “critical theory of race” away from schools in Virginia.

That is, if the rhetoric of Youngkin’s strongest supporters is any sign, an attack on any discussion of race and racism in state classrooms. In the interview with journalist Alex Wagner, a leading Republican activist in Virginia said just that, arguing that “parents” should teach students about racism and condemning a school assignment in which a sixth-grader blamed President Andrew Jackson for violence against Indians.

Virginia is the place where African slavery first took root in the British Atlantic Empire. There, after this development, English settlers developed an ideology of racism to justify their decision to “humiliate the Negro,” as historian Winthrop Jordan put it. There, in the mid-18th century, a strong class of plantation intellectuals developed a vision of freedom and liberty inextricably linked to their lives as slaveholders, and there, a century later, their descendants fought for construction. a slave empire in their name.

And all of this is before we get to Reconstruction and Jim Crow and the great resistance to inclusion in schools and many other forces that have shaped Virginia in the present. Just this week came the news of the death of A. Linwood Holton, who in 1969 was elected the country’s first Republican governor in the 20th century. Holton integrated schools in Virginia and broke the back of the Byrd segregation machine (named after the dominant Harry F. Byrd), which controlled the state from the 1890s to the 1960s.

Withdrawing discussions of race and racism from the classroom would make it impossible in practice to teach the history of the state of Virginia beyond dates, exact points, and obscure general things.

One of the closing ads from the Youngkin campaign he has a woman who resented Tony Morrison’s “Beloved” after her son, a high school senior, said the book caused him nightmares when he read it as part of an AP lesson. (I have no doubt that this is true, but I also believe that if black students have to face racism – and if we speak from experience, they face it – then white students should at least learn about it.)

Democracy requires empathy. We need to know how to see each other in order to see ourselves as politically equal. I think educating about history is an important way to build that empathy. Understanding a person’s experiences at a fundamentally different time and place means practicing the skills you need to see your fellow citizens as equal people, even if their lives are profoundly different and distant from yours. It is therefore crucial that students learn as much as possible about the many types of people who have lived and died in this land.

This democratic empathy is, in my view, a powerful force. For example, he can lead white children in isolated rural Virginia march and demonstrate in memory of a poor black man who died at the hands of police in downtown Minnesota.

I don’t know who will win the election in Virginia. At this point, it looks like brandy. I do know, however, that the panic against critical racial theory, seen in the light of empathy and its consequences, is seen as a background action in an already lost battle: a futile attempt to reverse the march of a force that has already done much. undermine the hierarchy and the “correct” order of things.

My Tuesday column was about the history of Section 3 of the 14th Amendment and why Congress was supposed to exclude those members who took part in the January 6 uprising.

If the ultimate goal of Section 3 was, in other words, to preserve the integrity of Congress from those who would seize its power and plan against the constitutional order itself, then Representative Bush is right to cite a clause against all members of Congress who turn to participate. with conspirators to annul the election, and whose allies are still struggling to “stop the theft”.

My Friday column was a bit more introspective than usual, as I tried to explain why I keep writing about structural and institutional changes that I know will never happen:

All this means is that I am not writing about structural reform because I believe it will happen in my life (although of course no one knows what the future will bring). I write about structural reform because, like Dahl, I think and I want readers to think expansively about American democracy and to understand that it is and has always been greater than the Constitution.

Keisha Blain and Fannie Lou Hamer for an hour.

Ali Karjoo-Ravary about Denis Villeneuve’s performance of “Dune” for Slate.

Talia B. Lavin on corporal punishment in her newsletter Substack.

Anna Gaca and Clash for Pitchfork.

Andrea Stanley on the trauma of climate change in The Washington Post.

Feedback If you enjoy what you read, recommend it to your friends. You can sign up here. If you want to share your thoughts on the article in this week’s newsletter or on the newsletter in general, email me at [email protected]. You can follow me on Twitter (@jbouie) in Instagram.

Photo of the week

Here’s something a little lighter than what I wrote this week. It’s from Dinosaur Kingdom II, a bizarre attraction near Luray Caverns in central Virginia. It features life-size dinosaur figures taking part in a battle with Union soldiers. This is very strange. Shortly after I returned to Virginia, I visited him and wasted a few rolls of film for photography. That was one of the guards.

This is a great, albeit non-traditional, buttery pumpkin soup. My only recommendation is to roast the pumpkin before adding it to the pot. I prefer to cut the pumpkin into large pieces and then bake it at about 400 degrees for 30 to 40 minutes to allow the pumpkin to develop flavor. It’s a little extra work, but you won’t regret it. The recipe comes from NYT cooking.

In a large pot or Dutch oven, set on medium heat, heat the olive oil to shine. Add the onion and cook while stirring until it starts to soften, about 5 minutes. Add the cashews and cook, stirring, until the onion is translucent and the cashews are lightly browned, about 3 minutes. Stir in the garlic and cook for 30 seconds. Add pumpkin, broth, ginger, cumin, coriander, curry powder and turmeric and stir to combine. Season to taste with salt and pepper and bring the soup to a boil. Reduce heat to low, cover pot and cook broth until pumpkin is easily pierced with a knife, 20 to 25 minutes. Uncover the broth and let it cool for 15 minutes.

If using a blender, return the soup to the pot, add the coconut milk and a sprig of rosemary, and cook over low heat, covered, until slightly thickened, about 15 to 20 minutes. Serve immediately or refrigerate until ready. If the soup is served later, dilute it with more broth or coconut milk to the desired consistency while heating the soup.