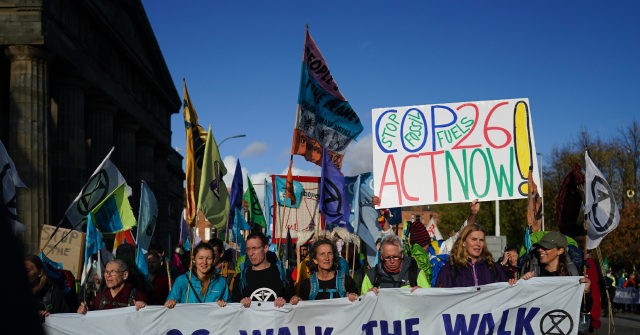 The best comment so far about the COP26 climate summit is by God’s will. He expressed his displeasure by sending a strong wind to strike the church, whose benevolent but misguided vicar asked his congregation to pray for this diabolical expression of the globalist elite domination that honors Gaius.

Given that COP26 is essentially satanic, why not expect that? https://t.co/2V4S4WD3ww

“We were just praying for the COP26 conference at church when it hit us, which I can only describe as a tornado that knocked down many trees, including this thousand before the conquest,” writes the friendly former pop star and BBC presenter who became The church. English priest, rev Richard Coles.

Coles is by no means the only priest to have fallen for this green nonsense. The rot goes right to the top.

It will take a great deal of imagination to build a new world that leads to the flourishing of all beings and creation. This vision of a renewed world is crucial.

It’s at your fingertips.

We can make that happen.# COP26 #ClimateJustice @ COP26

Climate change can be confronted with a renewed sense of shared responsibility for our world and effective solidarity based on justice, a sense of shared destiny, and a recognition of the unity of our human family in God’s plan for the world. # Faiths4COP26

But if God is really so fond of Malthusianism, chewing bats,, cutting birds eco cross, energy poverty, private aircraft for the elite and travel restrictions for the masses, the greed of companies looking for annuities, horse trading, corruption, green lies and propaganda, has a ridiculous way to show it.

COP26 began in Glasgow, Scotland, as it will surely last for the next fortnight: in chaos and disaster. Like the infamous COP15 in 2009 in Copenhagen, which preached “global warming” but was covered in the snow, COP26 is a complete storm of nonsense.

Almost everything that could go wrong went wrong, starting with the list of famous guests: of the world leaders, he was almost the only one who would have to make an effort to get President Joe Biden (who arrives in rainy Glasgow on Monday) to show up; Chinese President Xi, Russian President Putin and Brazilian President Bolsonaro have it all obviously decided to have a more urgent business of washing their hair in those fourteen weeks.

Normally, at this point, the desperate UK Prime Minister Boris Johnson, who has pledged his reputation for the success of the summit, could play on his trump card: the Queen.

Unfortunately, she is the queen moody. Now 95 years old and recently widowed, the usually tireless monarch is sick and has been advised at her doctors for rest.

Which leaves as a consolation prize, her eldest son, the Prince of Wales, to perform the honor. But Prince Charles does not have nearly the same position, authority, or prestige as the Queen. In fact, there is probably more responsibility.

Like the Crying Wolf Wolf, Prince Charles has so often blamed the imminent threat of “climate change” that almost no one takes his bubbling seriously. Also as a regularly at the Klaus ‘Annal’ Schwab World Economic Forum he proved this slave advocate the globalist Build Back Better agenda that it is not at all obvious that he is even speaking on behalf of his future ‘subjects’ at all.

Even the political leader of the host country of Scotland is unlikely to be of much help to Johnson. Nicola ‘Krankie Woman’ Sturgeon leads the party, the Scottish National Party (SNP), which is at odds with Johnson’s Conservatives. And because the host city of Glasgow is controlled by the SNP, her party has a great opportunity to help sabotage the event.

Glasgow has left an appropriately timed municipal waste strike which swarms rats and stagnates from uncollected garbage. The trick was blamed on former Prime Minister Margaret Thatcher (who has been dead for eight years and never, not even in her life, had a word on Glasgow’s garbage collections).

Local people are reportedly not enthusiastic about the political tricks being carried out in their midst. But then COP26 was never intended for prole; always, but always, COP events were an expression of elite supremacy.

There will be a fleet of private jets in the next two weeks landing at Glasgow Airport, they meet with fleets of limousines to take the billionaire ‘elite’ and their political pads to a closed special area where they will teach ordinary people how they should live in their new ‘sustainable’ future.

‘One rule for you, another for me,’ is the motto of the globalist elite.