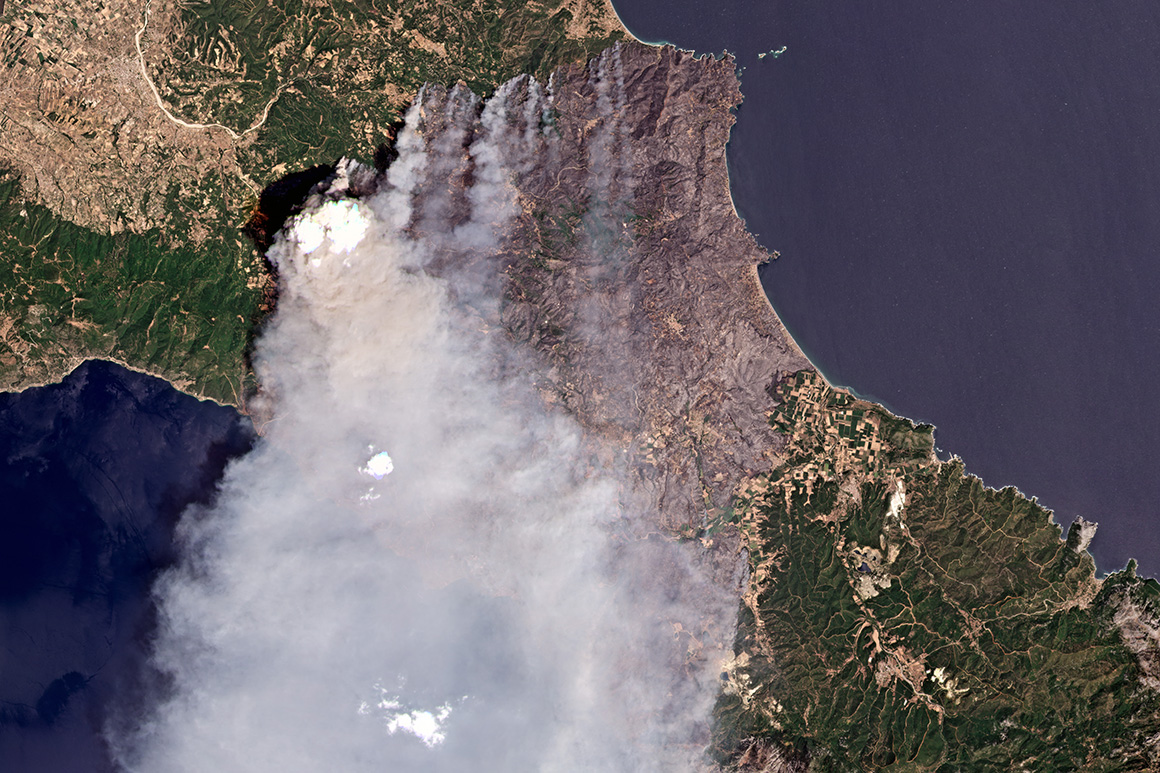 “Satellites were absolutely key in understanding we had a climate crisis,” said Krystal Azelton, director of space applications programs at the Secure World Foundation, a nonprofit Washington, D.C., think tank. “We are seeing vast improvements … in data sharing and access” and “the push to have open access to government data around the world is huge.”

The surge in new constellations of optical and radar satellites are also now making it possible to limit some of the damage of climate change — by predicting the trajectories of forest fires, measuring soil saturation to reduce flooding and detecting radio signals in remote regions to uncover illicit deforestation or mining.

Biden, who arrives Monday in Glasgow, has made greater reliance on space technologies a major pillar of his ambitious agenda to tackle the climate crisis.

One new effort is NASA’s Earth System Observatory program to “create a 3D, holistic view of Earth, from bedrock to atmosphere.”

And he requested $6.98 billion, or a 22 percent increase, for the National Oceanic and Atmospheric Administration, which operates an extensive constellation of weather satellites. That includes a proposed 25 percent increase for NOAA’s National Environmental Satellite, Data, and Information Service.

Biden’s budget proposals have been moving slowly through Congress since they were introduced in May. The NASA budget proposal has been approved by the House Science subcommittee and Senate appropriators, with increases of $240 million and $35.8 million, respectively.

NOAA would get nearly $6.3 billion under the Senate appropriations bill and the House Appropriations committee approved a $6.46 billion budget.

“The challenge of the climate crisis certainly requires that we examine every opportunity to leverage capabilities and build or enhance partnerships across the government and private sectors,” Johnson said. “One area we are continuing to consider is how to ensure open public access for any commercially provided data by our federal science agencies.”

Meanwhile, the National Space Council, the Cabinet-level body headed by Vice President Kamala Harris, has also made improving “our indications and warning of climate change” a priority for the nation’s space agenda.

Using satellites to understand changes in the environment is not new; NASA’s first effort to gather facts about natural resources from orbit, as opposed to measuring the weather in the atmosphere, was the launch of the first Landsat satellite in 1972.

Now, there are a variety of space-based means available on the commercial market to do it with far more accuracy and frequency.

From September 2011 to August 2020, the number of commercial satellites designed to capture high-resolution images or detect heat or other invisible signatures jumped from 10 to 338, according to the Union of Concerned Scientists, which updates its list several times a year. POLITICO used the final update of each year for the tally. In the most recent update released in May, there were 450 commercial satellites used for earth observation.

“The only way to really get a global view is from satellites,” said Walter Scott, chief technology officer at space technology company Maxar Technologies. “You need to be able to make observations over a longer period of time, to be able to see trends that are in fact climate as opposed to local variations in weather.”

The tools now available, however, are akin to being able to analyze census data by neighborhood instead of just at the regional or national levels.

One class of targets is what climate scientists call “heat islands,” or urbanized areas that experience higher temperatures than outlying areas, which can be better analyzed with higher resolution imaging.

“There are things that are happening on very small scales, urban scales,” said Vernon Morris, an atmospheric and climate scientist at Arizona State University.

“The ability to gather this granularity of data, so often, is probably the biggest difference,” agreed Matt Tirman, head of Satellogic North America, a division of the Argentine company founded in 2010 that operates a constellation of satellites that can also capture live-motion video.

“I do think it is a game changer,” added Morris.

Planet, an Earth observation company founded in 2010, recently partnered with NASA’s Jet Propulsion Lab, the state of California and a group of nonprofits to create the Carbon Mapper, which will use its satellites to scan the globe daily for emissions of damaging substances like methane — an invisible, odorless and powerful greenhouse gas.

“It will be able to see that it’s that building, and that oil pad, and that landfill that are responsible for methane leaks,” said Andrew Zolli, Planet’s chief impact officer. “This is the incredibly sensitive — what we call point source emissions detector.”

Another similar effort is Climate TRACE, a collection of scientific institutions that is using Earth observation data to monitor coal-fired power plants.

“They are looking at the coal plant and the coal that is flowing through the plant to determine if it is operating,” Zolli said.

Another new set of tools is radar satellites that can monitor environmental changes in the Arctic or mountainous regions that are often obscured by clouds and darkness, major limitations for optical satellites.

For instance, ICEYE, a Finnish company founded in 2014, is monitoring floating ice in the Nares Strait near Greenland and the Thwaites Glacier in Antarctica.

The new tools are “of great importance especially for small-scale glacier monitoring,” said Eric Jensen, president of ICEYE US, its American subsidiary,

Satellites outfitted with synthetic aperture and hyperspectral radars, meanwhile, have “an influence on our ability to better understand wildfires and what causes them and how they can be addressed,” said Azelton.

Indeed, the growth of satellite imagery and data is providing new means to head off some of the more calamitous effects of climate change.

“The ability to observe, which can ultimately lead to the ability to predict, is really what prepares us for hazards and helps us mitigate the disasters that they can lead to,” said Karen St. Germain, director of NASA’s Earth Science division.

She noted that satellites can examine the trajectory of forest fires in real time and identify burn scars that cause landslides.

“Vegetation is what holds the soil together,” she explained. “So, if the area’s burned and then the precipitation comes, that’s when you can get landslides and cascading effects.”

ICEYE’s radar satellites can also be used to quickly identify downed or damaged power lines, responsible for starting thousands of forest fires, so that crews can respond before it’s too late.

Satellites are also assisting in the aftermath of climate-related natural disasters.

The satellite data of Spire Global, which describes itself as a “space-to-cloud data and analytics company,” boosted the accuracy of climate models and predicted a wildfire south of Lake Tahoe in Northern California 45 days before the inferno. It also forecast where winds would drive the flames.

New satellites and sensors are also being used to track human activity that might be taking advantage of environmental calamity.

One example is in the Arctic, where melting ice has led to a steady rise in commercial and military activity, particularly in the summer months.

“It’s really opened up that whole region,” said Adam Bennett, a senior director at HawkEye 360, which operates satellites that can detect radio frequency signals. “People don’t always know what’s happening up there. So we did some sweeps and it was interesting to see here how we detected all kinds of additional RF activity in some cases in places we never would have expected.”

“We were detecting things even all over the sea ice,” he added. “You know different concentrations of VHF communication. We saw a lot of additional maritime activity. You could even see vessels taking these pathways around the sea ice. You would not even know they were there.”

Detections can also be made in real-time when responding to major disasters. Satellites from Maxar, NOAA and the Bureau of Ocean Energy Management were used to map the early October oil spill off California’s Pacific coast.

There are, of course, limitations to space-based technology, most notably in ocean environments.

Satellites can capture sea surface temperatures and measure coral reefs — and they can even gauge the thickness of the oil on the surface of the water to direct cleanup crews after a spill. But they can only see a few meters deep.

According to NOAA’s National Ocean Service, more than 80 percent of the world’s oceans remain unmapped, unobserved and unexplored.

“That’s why we need to rely on ocean technologies and ocean exploration, and a lot of the marine sensor technologies that are coming online, to understand what’s going on in the deeper ocean, both in terms of biodiversity, as well as energy changes,” Morris said.

Yet, the game-changing potential of satellite data can make a huge difference if it is matched with the capacity on the ground to analyze, share and apply it.

And large swaths of the globe where the effects of climate change are most pronounced are not connected.

In West Africa, for example, “people don’t know when the big flood is coming because there’s no one to really take the satellite data and make it applicable on the ground,” said Gregory Jenkins, a professor of atmospheric science and African studies at Pennsylvania State University, noting that satellite data hasn’t even been fully integrated into weather forecasting on most of the continent.

“We need to do much more in terms of assimilating satellite data into the weather forecast to improve them,” Jenkins said. “But we also need ground information to evaluate whatever the forecasts or the satellites are saying.”

Finding more ways to share the data needs to be the priority of global leaders, numerous experts and executives say.

Jasmine Sanders, a climate scientist and marine biologist who is executive director of climate youth advocacy organization Our Climate, said there remains too wide a gap between satellite companies and the advocacy groups, the scientific community and the government agencies who can make the most of it.

“There’s no one in between or no entity or organization that is showing how these groups could be connected,” she said.

Johnson said one of her priorities is “how to ensure open public access for any commercially provided data by our federal science agencies.”

But ultimately applying all this new, increasingly more detailed data is about far more than just diagnosing the extent of climate change and singling out the leading causes.

“It’s not just about naming and shaming,” said Zolli. “It’s about creating the feedback loop so that we know whether we’re making progress or not.”