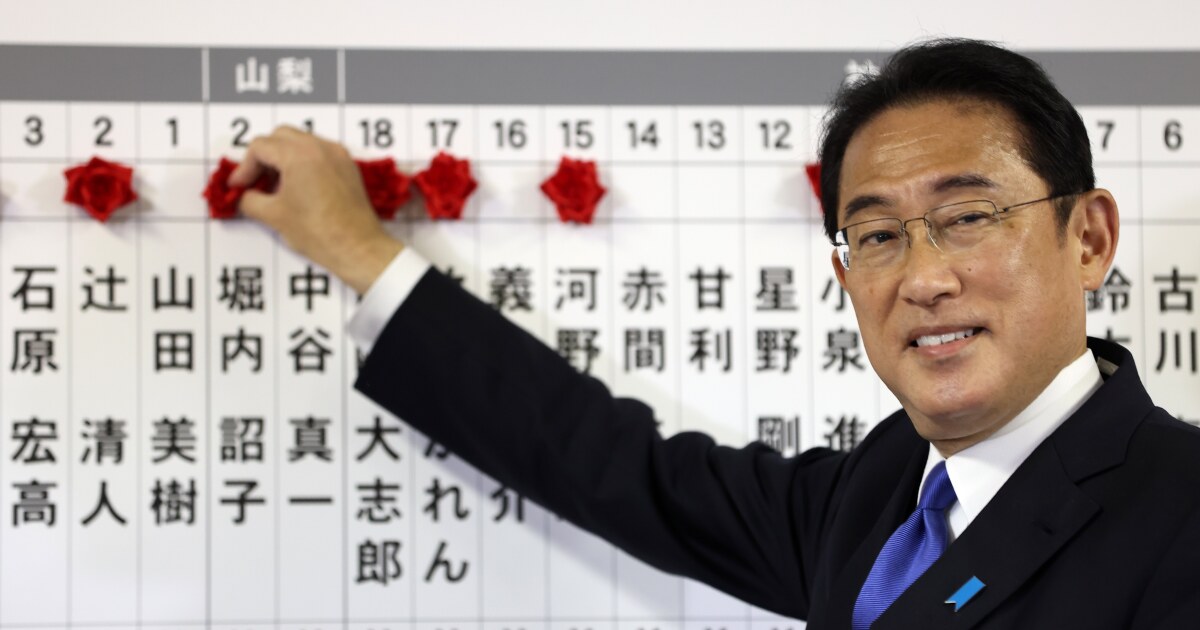 The government coalition of Japanese Prime Minister Fumi Kishida retained a majority in Sunday’s parliamentary elections, but is expected to lose some seats due to the failure of his week-old government struggling with a coronavirus-hit economy and regional security challenges.

Their combined strength exceeded the parliamentary majority of 233 as well as the “absolute majority” of 261 seats – a level that allows the ruling bloc to oversee all parliamentary committees and read the law easily. He also showed a loss of 305 seats earlier.

The LDP’s losses included those held by influential party members, such as Secretary-General Akira Amari, which could require the replacement of key positions.

“Elections to the lower house are about choosing leadership,” Kishida told NHK. “Since the ruling coalition certainly kept the majority, I believe we got a mandate from the voters.”

Kishida said the projected loss of seats is due in part to the strategy of opposition parties to nominate single candidates in many single-seat constituencies, as well as to voters ’assessment of his predecessors over the past four years.

Kishida, 64, was elected prime minister on October 4 after winning a leadership race in his ruling party, and the lower house was dissolved just 10 days after taking office. Conservative party leaders saw him as a safe successor to Yoshihide Suga and his influential predecessor Shinzzo Abe.

Exit polls were more or less in line with media forecasts. Official results are expected by early Monday.

Kishida’s immediate task was to garner support for the party, which was weakened by Suga’s apparent approach to pandemic measures and his insistence on holding the Tokyo Summer Olympics despite widespread opposition due to the large number of coronavirus cases that have fallen sharply since then.

Kishida has repeatedly stressed his determination to listen to the people and respond to criticism that Abe-Suga’s nine-year leadership has fanned corruption, tamed bureaucrats and jammed opposing views.

The campaign focused largely on measures to respond to COVID-19 and revive the economy.

While the ruling party stressed the importance of a stronger military due to concerns about China’s growing influence and North Korea’s missile and nuclear threat, opposition parties focused on diversity issues and worked for gender equality.

Opposition leaders complain that recent LDP governments have widened the gap between rich and poor, failed to support the economy during the pandemic, and stalled initiatives for gender equality and diversity. This year, Japan ranked 120th in the World Economic Forum’s 156 countries on the gender gap.

The opposition has long struggled to get enough votes to form a government after the brief reign of the now-failed center-left Democratic Party of Japan in 2009-2012, as it failed to present a grand vision for the country.

As for the economy, Kishida highlighted growth with rising incomes, while opposition groups are focusing more on the redistribution of wealth and calling for cash payments to low-income households affected by the pandemic.

Kishida promised during the campaign to boost growth and “distribute its fruits” to people as income.

Kishida said on Sunday that he intends to reappoint the same members to his post-election cabinet to speed up work on the supplementary budget so he can fund an economic package to support people and businesses affected by the pandemic.

“I will take concrete steps to implement our policy as soon as possible,” Kishida said. “I need to move fast.”

Before starting work on this, Kishida said he is heading to Glasgow, Scotland, where he will attend the COP26 summit on November 2nd. “This is a global issue for all of humanity and Japan must take our responsibility,” he said.

Of the 1,051 candidates, only 17% are women, despite a 2018 law that promotes gender equality in elections, which is toothless because there are no penalties. Women make up about 10% of parliament, a position that gender rights experts call “democracy without women”.

Voters, including young couples with young children, began arriving at polling stations in central Tokyo early in the morning.

Shinji Asada, 44, said he compared measures for COVID-19 to select a candidate, hoping for a change of leadership because he believes the ruling party lacks clarification and transparency regarding its pandemic measures. He said that despite Kishida’s promise to pay more attention to people’s voices, “I thought nothing would change [under him] after a tour of his cabinet, ”whose seats mostly belonged to the party factions that voted for him.

A 50-year-old part-time worker, Kana Kasai, said she voted for someone she thought would “work fingers to the bone” for a better future.