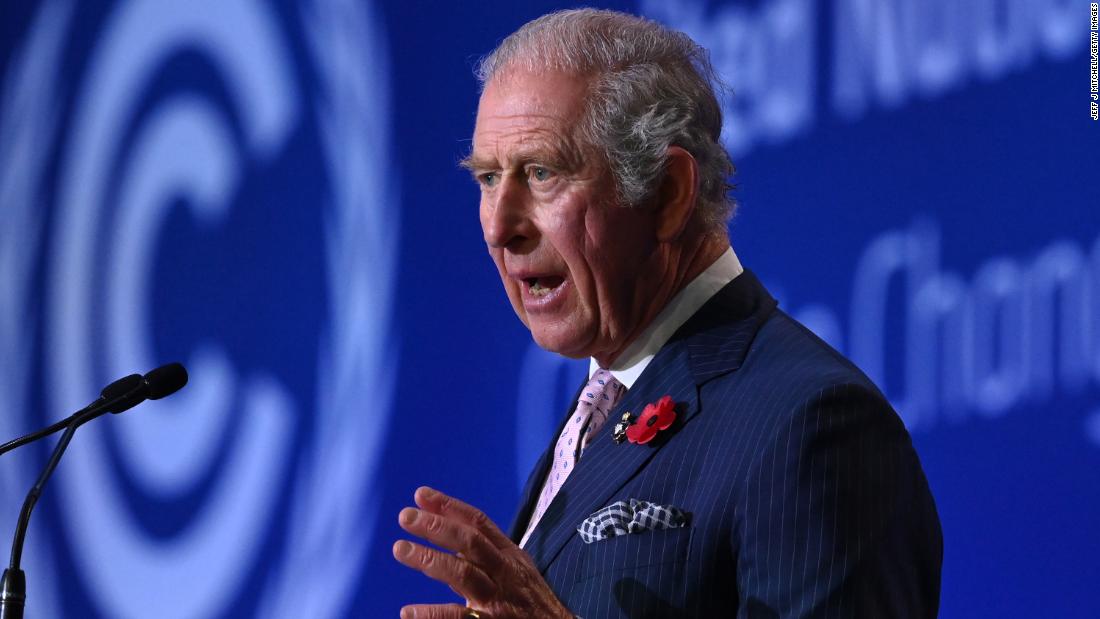 There’s no doubt that Charles is a pioneer on green issues, delivering his first speech on the topic way back in 1970 when he warned about plastic waste. Over recent years, his focus has been on climate change and his warnings have become ever more stark.

In his opening speech at COP26, Charles said climate change posed an “existential threat, to the extent that we have to put ourselves on what might be called a war-like footing.”

The prince’s profile at the event was elevated because he had to step up and represent the Queen, who was unable to attend, but he has been set on making a splash at the climate talks for some time.

He always planned to stay all week, to meet as many influential people as possible and persuade them to do more. It’s noticeable how Charles, and indeed his son William, have put themselves at the front of the campaign to save our planet.

Historically, royals attended summits like COP as Britain’s strongest diplomatic assets, wining and dining guests. These days, they collaborate with them on projects, too.

We spent a few hours with the Prince of Wales on a visit to the Kelvingrove Art Gallery in Glasgow on Wednesday. We watched as he was welcomed outside by the chief executive of McLaren Racing and their first female driver, Emma Gilmour, and was shown a model of their new Extreme E vehicle — a rally car without the petrol. (Charles — who you’ll remember converted the engine of his own Aston Martin to run on surplus wine and whey, a by-product of cheese production — will have no doubt loved it.)

He then went inside, to a room crammed full of some of the world’s most powerful business leaders, including the chief executives of AstraZeneca, Bank of America and Unilever. He presented them with the Terra Carta award, the prince’s own royal seal of approval for sustainable business.

Before he left, he made time for fashion designer Stella McCartney and her friend Leonardo DiCaprio for a discussion about sustainable fashion.

Meanwhile, William was promoting his own environmental award scheme — the Earthshot Prize — this week and was spotted discussing it with Jeff Bezos, who’s helping fund the awards. The pair may have expressed differing views on the merits of space tourism but they clearly haven’t let it get personal.

Bezos later tweeted his pride at being a founding funder of Earthshot before reflecting on William’s green mission, writing: “It’s easy to see how passionate and thoughtful he is about this important work.”

But William’s greatest moment at the summit perhaps came not from his high-profile meetings but in the reflected glory of a 15-year-old inventor.

Teen innovator Vinisha Umashankar made the Earthshot finals for her design of a solar-powered ironing board to cut down coal usage in India. William shared the stage with her as she gave a speech that went down so well it earned her a standing ovation from world leaders, including her own Prime Minister, Narendra Modi.

“Today I ask, with all due respect, that we stop talking and start doing,” she implored of the gathered VIPs. “We, the Earthshot Prize winners and finalists, need you to back our innovations, projects and solutions, not an economy built on fossil fuels, smoke and pollution. We need to stop thinking about old debates because we need a new vision for a new future. So, you need to invest your time, money and effort in us to shape our future.”

It’s easy to imagine William or Charles using similar language and expressions, which shows how close they have come to campaigning. A sign that royalty is truly evolving with the times.

With most of the senior British royals out in full force in Glasgow, we thought a selection of photos from the many, many events they attended might be called for.

On Monday, the Duchess of Cambridge got her hands dirty when she and William swung by Alexandra Park Sports Hub in Glasgow to meet Scouts and learn about their #PromiseToThePlanet campaign.

Later, William took a pass when his wife offered up a tub of dead larvae, used as livestock feed, while the pair chatted at a reception that brought together Earthshot Prize winners and finalists and members of Prince Charles’ Sustainable Markets Initiative (SMI). It was the first time many of the Earthshot finalists met each other as well as the royals. SMI aims to unite business leaders to collaborate on solutions for a more sustainable future.

The day ended with an evening reception with all senior royals present to help welcome visiting heads of state and government. President Biden looked delighted to see William.

At the same reception, Camilla shared a laugh with German Chancellor Angela Merkel.

The Duke of Cambridge spoke with Japan’s Vice-Minister for Global Environmental Affairs, Yutaka Shoda, on the sidelines of the conference on Tuesday.

She may not have been able to attend in person but the Queen’s influence at the climate summit was felt across the nation. Here’s a photo of a quote from her COP26 video message, displayed at Piccadilly Circus in London on Wednesday.

WHAT ELSE IS HAPPENING?

The Queen departs Windsor for a mini-break.

The Queen has left Windsor Castle for a long-planned weekend away, a royal source told CNN on Thursday. The 95-year-old monarch had been lying low at the royal property following medical advice to rest for a fortnight. Her mini-break had been in the diary for some time, with doctors giving her the all clear to head to Sandringham by helicopter, according to Britain’s “The Mirror” newspaper. She’s understood to be traveling to her country estate to make preparations to welcome her family over Christmas, the report added. Elizabeth was seen driving around the Windsor estate on Monday, in what will have been a reassuring sight to many royal-watchers. It was the first time she’d been seen since her hospital visit last month. While she has had to forgo COP26, Buckingham Palace was clear that she intends to lead the nation when it honors its war dead, with her presence at the National Service of Remembrance on November 14. And another positive signal came from British Prime Minister Boris Johnson, who on Saturday described the Queen as being “on very good form” when they spoke last week. Read more.

Manhattan federal judge Lewis Kaplan has set a court date for January 5 to hear oral arguments on the Duke of York’s motion to dismiss the civil suit against him by Virginia Roberts Giuffre, who claims the royal assaulted her when she was 17. Andrew filed the motion on October 29, with an attorney representing the duke saying he “unequivocally denies Giuffre’s false allegations against him.” Earlier this week, Kaplan said a trial could take place next fall, explaining that it was difficult to set an exact date because of problems accommodating juries safely due to the pandemic. (With reporting from CNN’s Kara Scannell)

The Princess Royal made a fleeting one-day visit to Northern Ireland on Tuesday, weeks after the Queen canceled her own trip to the region. The whistle-stop tour saw Anne conduct a few engagements in Londonderry, also known as Derry. She started the day by calling in at the Siege Museum, which commemorates the 1688 blockade, where she spoke with school children. Later she unveiled a commemorative stone marking the 100th anniversary of Northern Ireland. It was her second visit to the province this year, having previously traveled there in July.

IN THE ROYAL DIARY

Prince Charles is set to visit Barbados to mark the country’s transition to a republic within the Commonwealth, his office announced Friday. Prime Minister Mia Mottley, pictured above with the royal at COP26 this week, extended the invitation to the Prince of Wales “as future Head of the Commonwealth, to be Guest of Honour at the Republic Celebration events,” Clarence House said. Charles will also carry out a short program of events while in the country. The prince was last in the country back in March 2019, when he visited with Camilla as part of a tour of the Caribbean. Barbados elected its first-ever president last month as part of its plans to shed its colonial past. Sandra Mason will be sworn in when the nation becomes a republic on November 30 — its 55th anniversary of independence from Britain.

Prince Charles’ former home is up for sale … but there’s a catch.

A country estate in southwest England once owned by the Prince of Wales is on the market for a cool £4.95 million ($6.7 million). And should you be interested in purchasing the property, real estate agent Knight Frank reveals that you may have a royal drop-in. The current owners bought the six-bedroom Edwardian family home in Dartmoor National Park from the heir to the throne about 27 years ago, and the terms of sale allow Charles “to retain the right to fish on the property’s river bank as long as 24 hour notice is given,” according to the listing details sent to CNN. Get the whole story.

It feels so good to be back in movie theaters post-pandemic restrictions to gobble up popcorn alongside fellow film lovers. One movie that’s getting some Oscars buzz is “Spencer,” from director Pablo Larrain, and starring “Twilight” alum Kristen Stewart as Princess Di. It’s been described as “a fable from a true tragedy,” imagining three days she spent at Sandringham in 1991 as she contemplates her split from the royal family. Premiering in US and UK theaters on Friday, reviews are starting to drop, including from CNN senior writer Brian Lowry, who says “Stewart puts her stamp on the character.” Read his full review here (and don’t worry — no spoilers).
In conversation with CNN Style, Claire Mathon, one of the most in-demand cinematographers right now, revealed a spontaneity to the film’s shoots, as her camera engaged in an elaborate dance with Stewart. “I had never been as close to an actress with a camera,” she said. “(Stewart’s) interpretation played with the camera … It’s one of the subjects of the film: (Diana’s) relationship between hiding and locking herself away, while at the same time being in constant view — too seen. How she reveals herself (is) how she remains free.” Check out the full interview.

FROM THE ROYAL VAULT

The press interest in Diana only grew after her marriage to Prince Charles ended. Media commentators say she needed to make sure that the narrative around her life moving forward was positive, and she was known to woo the media with lunches at Kensington Palace. “She could throw you off your guard with a flutter of the eyelids. It was a tactic,” says David Banks, editorial director of the “Daily Mirror” newspaper between 1992 and 1999, in the latest episode of CNN’s “Diana” series.

Don’t forget that the penultimate episode — which delves into the price of freedom following her marriage — airs this Sunday from 9 p.m. ET/PT.

“It is a source of great pride to me that the leading role my husband played in encouraging people to protect our fragile planet, lives on through the work of our eldest son Charles and his eldest son William. I could not be more proud of them.”

Queen Elizabeth II recalled her late husband, Prince Philip, and his commitment to environmental issues in her COP26 message.

The Queen described welcoming world leaders to Glasgow for the climate talks as fitting, considering it was “once a heartland of the industrial revolution,” in a pre-recorded video message for a reception on Monday. She spoke of hope when nations come together for a common cause and for delegates to rise above any “politics of the moment.” She ended the speech by offering her best wishes. “None of us will live forever. But we are doing this not for ourselves but for our children and our children’s children, and those who will follow in their footsteps.”