A 30-year-old career criminal yelled ‘America’s gonna burn’ after being arrested over the cold-blooded murder of a 19-year-old Burger King cashier during a robbery this week – and the homeless man was free to kill after being released without bail for menacing another man with a screwdriver little more than a month before the murder.

Winston Glynn was tracked down in Brooklyn after an intense citywide manhunt following the shocking murder of Kristal Bayron-Nieves at the East Harlem Burger King, where NYPD officials said Glynn previously had worked.

Glynn was out on the street following his arrest on November 30 because his crime was ‘not bail eligible.’

The Jamaican immigrant was being led out of the 25th Precinct stationhouse after being booked Friday afternoon when he launched into his rant as people called him a murderer in Spanish. His victim was Puerto Rican.

‘Why am I guilty?’ Glynn shouted through the blue mask covering his face as officers walked him to a waiting police car.

‘Where is our president? I’m saying it real.’

Detectives attempted to load the handcuffed suspect into the back of the car when he screamed ‘F*** you all! and then bellowed, ‘America’s gonna BURN!’

The cops then grabbed him by the shoulders and the top of his head as they struggled to shove him in the vehicle.

But Glynn had one last parting shout for those yelling at him in Spanish. 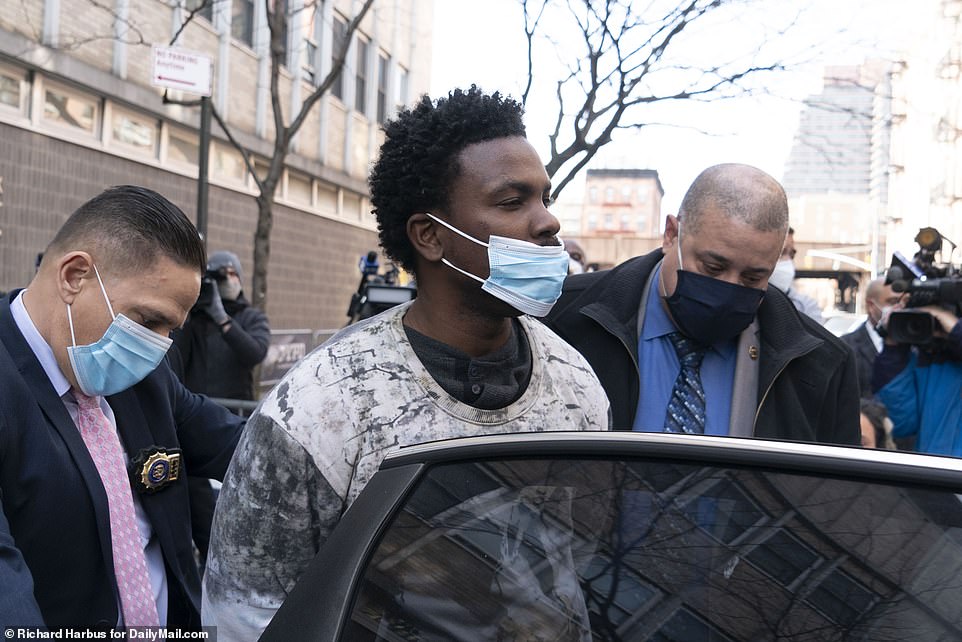 He faces charges of murder, robbery, criminal use of a firearm and criminal possession of a weapon 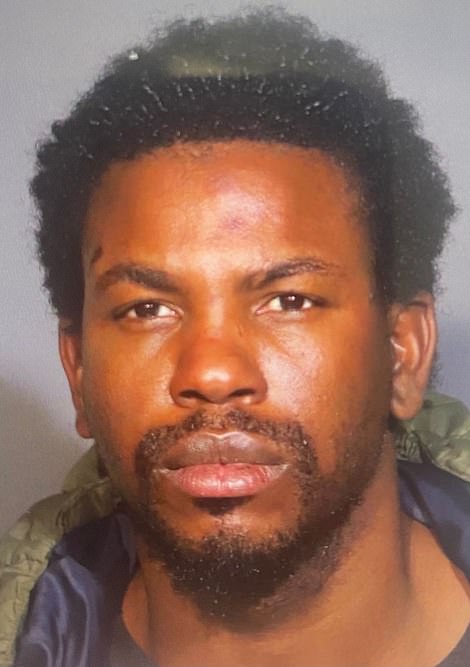 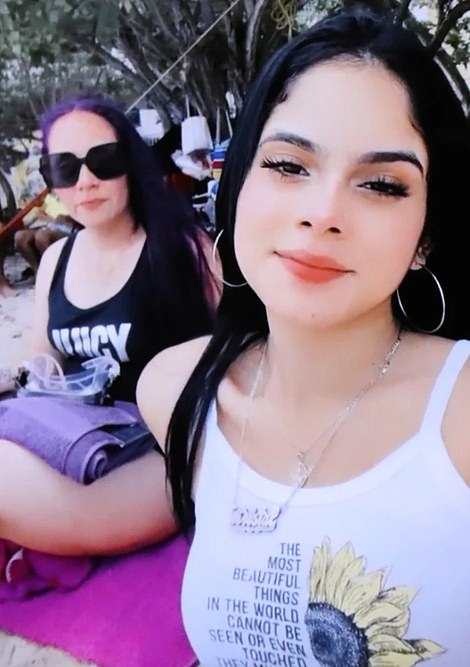 Glynn is pictured in a mugshot, left. He is accused of killing Kristal Bayron-Nieves, 19, in cold blood after demanding cash from her at a Burger King last Sunday 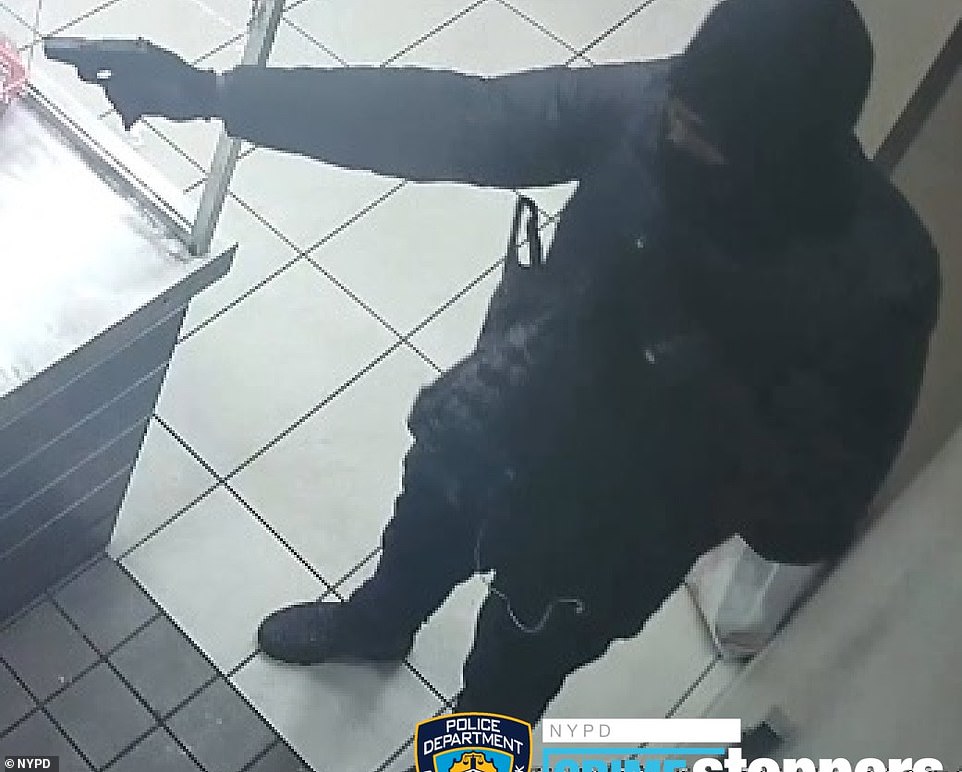 Police have arrested Winston Glynn, 30, in the killing of a 19-year-old Burger King cashier. Surveillance photo of the suspect during the commission of the crime is seen above

His criminal record includes at least four prior arrests, most recently in November 2021, when he was charged with menacing with a weapon.

A spokesperson for the Queens District Attorney told DailyMail.com on Friday that Glynn was released from jail on his own recognizance because the offense he was charged with is an A misdemeanor, which ‘is not bail eligible.’

According to court documents obtained by DailyMail.com, during the November 30 incident at a homeless shelter where Glynn was staying, he allegedly threatened another man with a screwdriver.

He was quoted as telling the alleged victim: ‘I will stab you.’

Glynn’s court date in the menacing case was scheduled for March 1.

His rap sheet also includes charges of criminal possession of a weapon and another menacing charge from 2018, and a criminal mischief charge stemming from a 2017 incident. 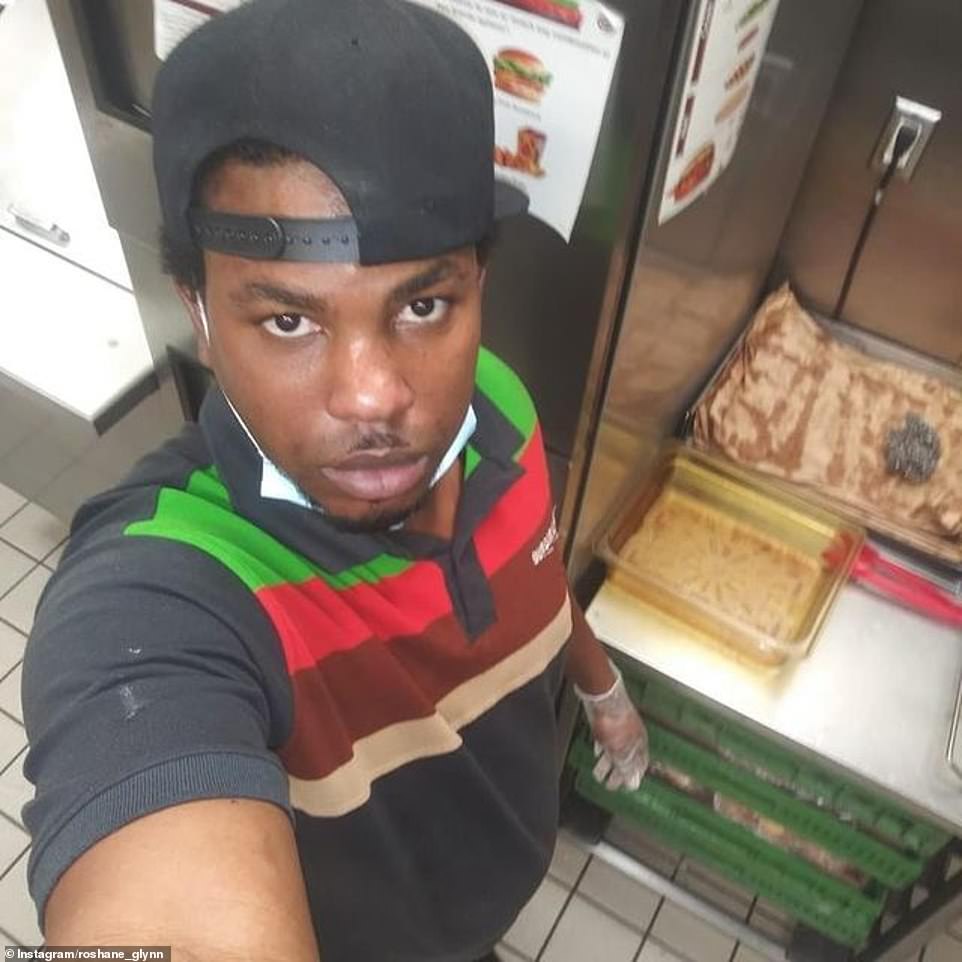 Police say Glynn had worked at the same Burger King as the victim between April 2020 and December 2020c, more than a year before she was hired. He is pictured above in his work uniform 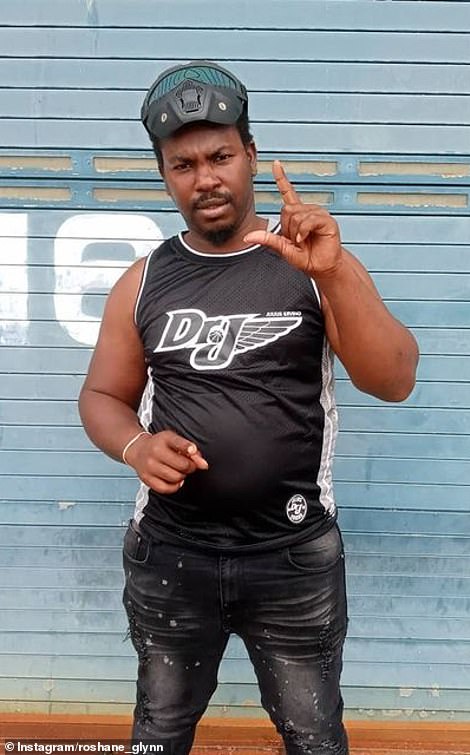 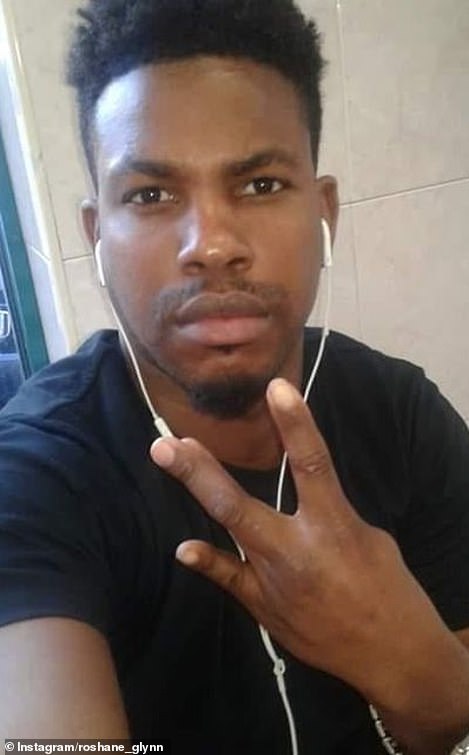 Cops say the suspect’s white earbuds that were seen in surveillance video hanging from his pocket helped lead them to Glynn. The 30-year-old is pictured wearing earbuds on the right

The highly-publicized killing of an innocent teen working the late shift to save up for a car even brought Mayor Eric Adams to the media-packed stationhouse, where he quickly convicted the suspect.

‘I don’t come to press conferences of arrests, but this one was so personal,’ said the new mayor, who has vowed to crack down on the lawlessness left behind by the Bill de Blasio administration.

‘He murdered that child. He had no regard for the people he assaulted with that gun inside the restaurant.’

During the press conference, police revealed that Glynn allegedly shot Bayron-Nieves as she was crouching by a cash register, which she tried to open in order to comply with his demands for more cash, but could not because she did not have a key.

Glynn was apprehended in the Bedford-Stuyvesant section of Brooklyn on Thursday night, after police say they used surveillance video to track his movements from Harlem.

Cops revealed that a pair of white earbuds hanging from the murder suspect’s pants helped lead them to the Glynn.

Clothing seen on the suspect at the time of the killing was said to have been spotted on Glynn’s social media pages, and witnesses helped confirm his identity, according to police sources.

Glynn’s address is listed as a Days Inn hotel in Queens, which has been used as a homeless shelter.

According to reporting by the New York Post, citing police sources, Glynn is a Jamaican national and is not a US citizen.

During Friday’s press conference, police officials said that Glynn had worked at the Burger King on East 116th Street between April 2020 and December 2020. There is nothing to suggest that he knew Bayron-Nieves, who was hired as a cashier at the eatery a year after Glynn quit.

Police recounted how just before 2am on Sunday, Glynn allegedly walked into the fast-food restaurant, wearing a ski mask, an all-black outfit, and carrying a backpack. He had white earbuds hanging out of his pants pocket. 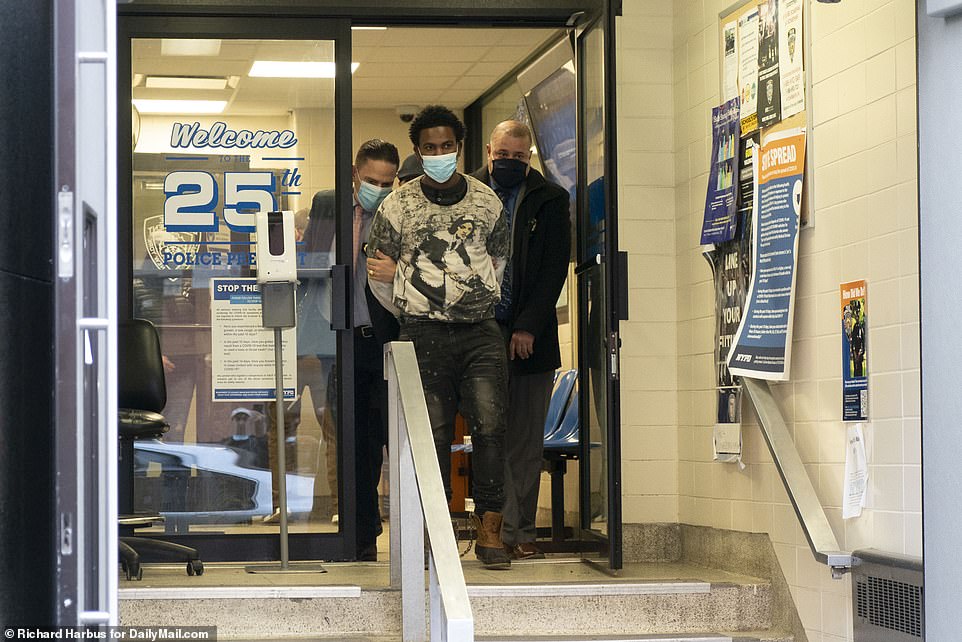 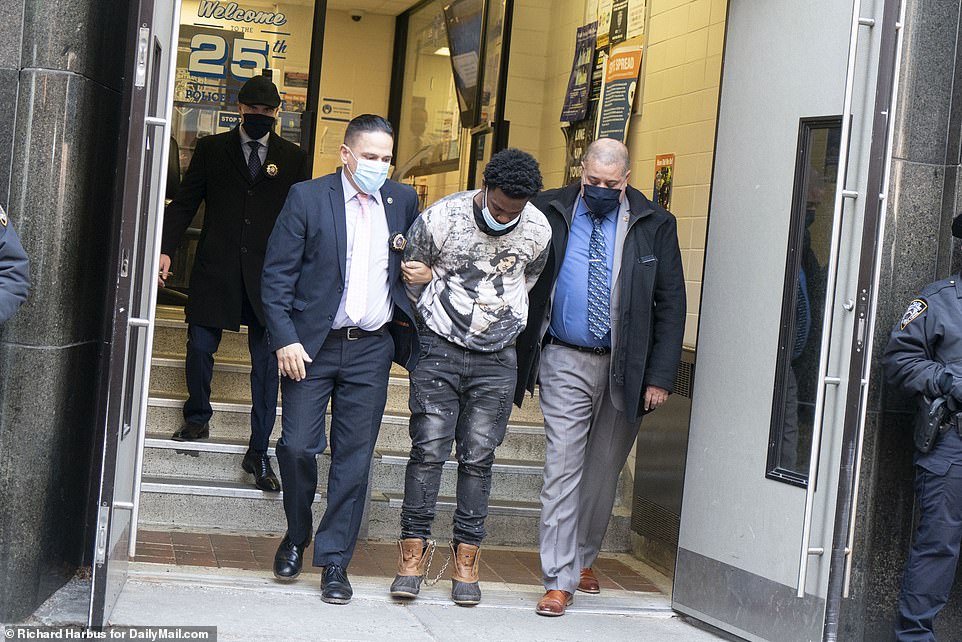 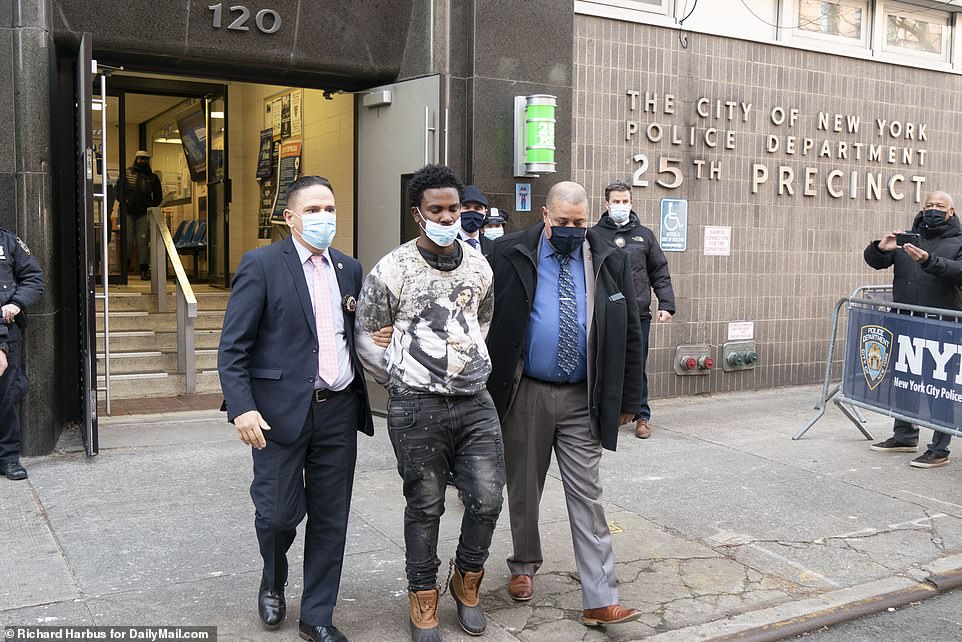 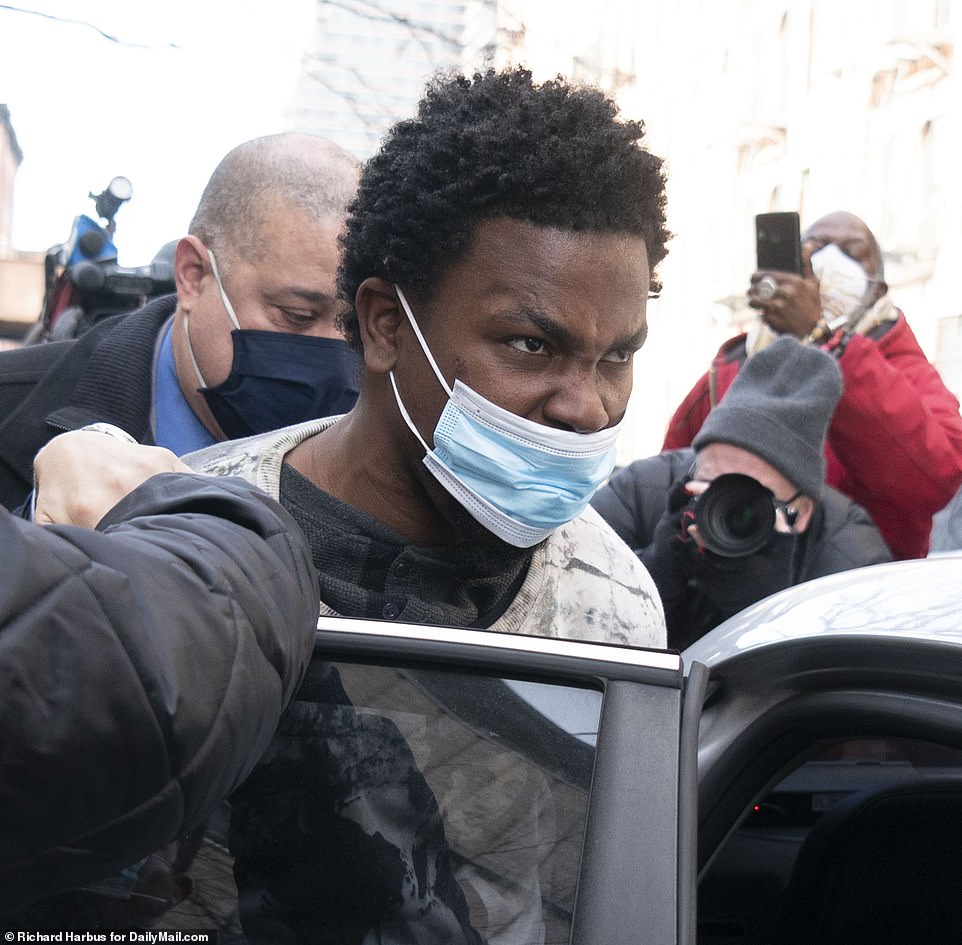 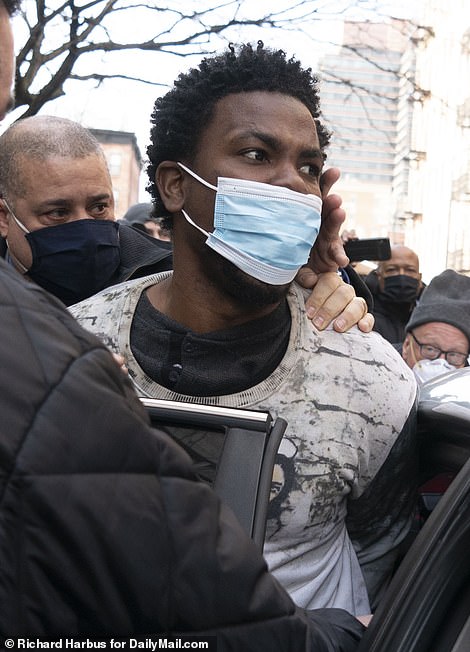 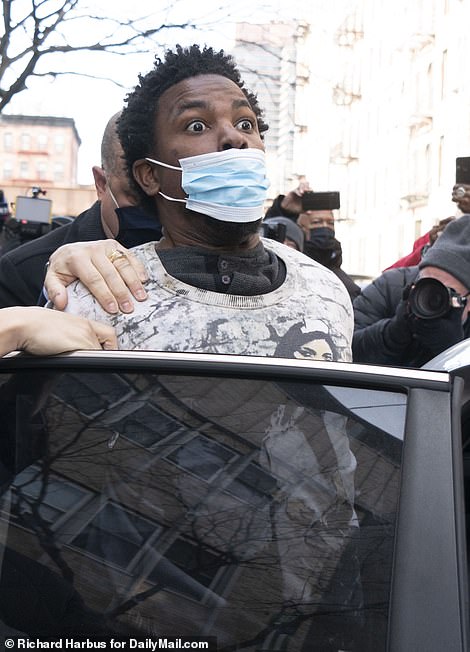 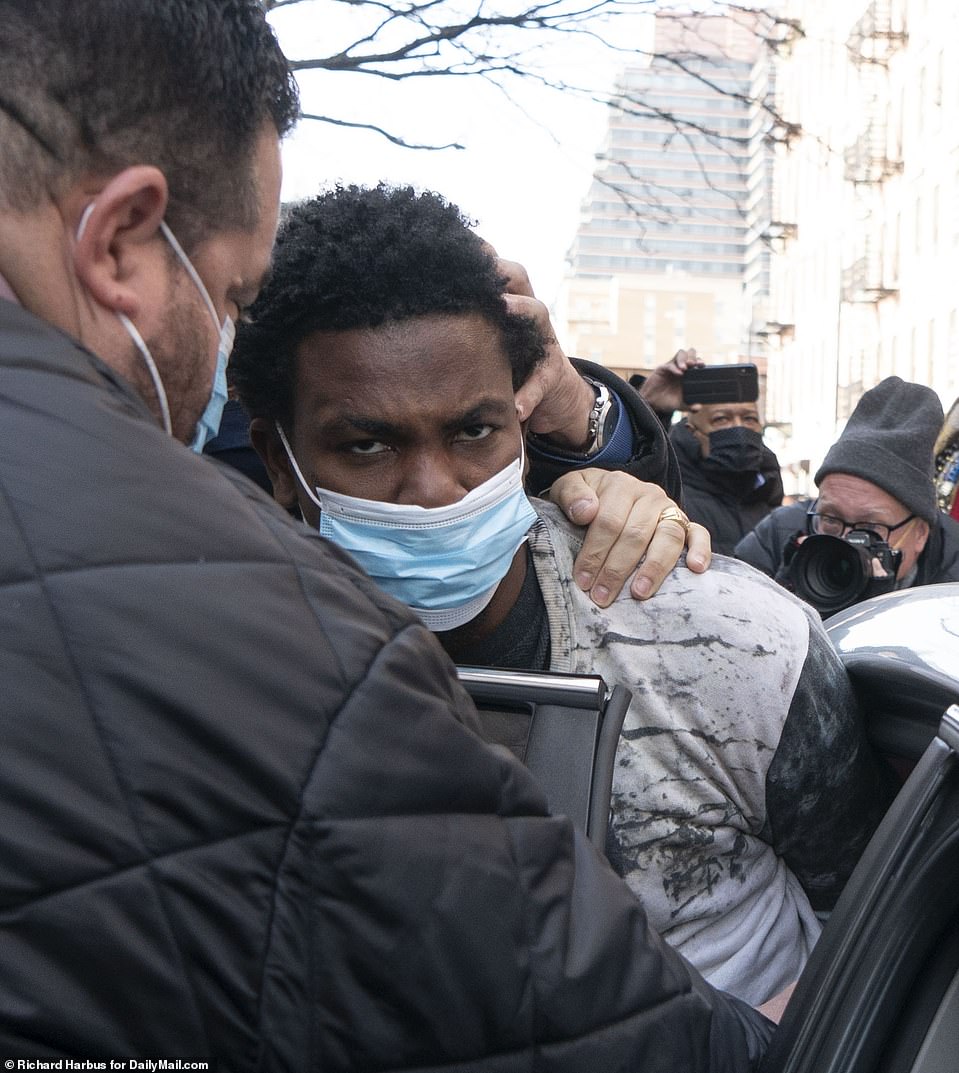 Glynn was said to have worked at another Burger King eatery. It’s unclear if he knew Bayron-Nieves before allegedly killing her

Glynn allegedly pistol-whipped a customer and a manager, knocking out two of her teeth, and then aimed a gun at Bayron-Nieves, demanding cash.

The 19-year-old cashier handed the attacker $100, but he demanded more money. Police said Bayron-Nieves crouched down to try and open a second cash register drawer, but had no key. That is when Glynn fired a single shot and fled, grabbing the injured Burger King manager’s phone on his way out.

Bayron-Nieves was pronounced dead at the scene.

‘There was no reason to shoot this young woman,’ said NYPD Chief of Department Kenneth Corey. ‘Money had been handed over. She was killed for no apparent reason.’

Chief of Detectives James Essig said that dozens of police officers canvassed surveillance video from the subway system and spotted a man wearing different clothes than the suspect in the Burger King video, but with the same white earbuds hanging from his pocket.

They eventually tracked down Glynn to an address on Patchen Avenue in Brooklyn and arrested him without incident on Thursday.

Detectives recovered the backpack, earbuds and some distinctive clothing, Essig said. The gun used in the killing has yet to be located.

The chief of detectives added that all evidence indicates that Glynn had pre-planned the armed robbery at his former place of employment.

Bayron-Nieves’s family have been notified of Glynn’s arrest, which came just hours after a candlelight vigil was held outside the Burger King where the cashier was shot dead. 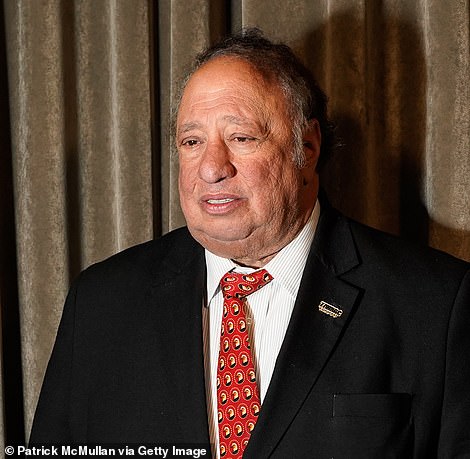 Billionaire John Catsimatidis, 73, said he was ’emotionally distraught’ when he heard about the death of Bayron-Nieves and offered a $10,000 reward for anyone that helps with the ‘arrest and conviction of the killer’

‘My family is actually excited that they caught [the suspect],’ Bayron-Nieves’ cousin, Shiming Nieves, said. ‘That’s not gonna bring her back or anything, but a little bit of relief and little by little we’re gonna be picking up the pieces, to get our family strong again.’

A $20,000 reward had been offered for information leading to an arrest, with half of that amount being put up by billionaire businessman John Catsimatidis, the CEO of the grocery store chain Gristedes.

Prior to Thursday’s arrest, Catsimatidis, 73, said he was ’emotionally distraught’ when he heard about the death of the Burger King worker.

‘This young woman lost her life over $100! I choked up,’ he told the New York Post on Tuesday.

The radio host and former Republican candidate for mayor posted an ad offering a ‘$10,000 reward for the arrest and conviction of Bayron-Nieves’ killer.

The number of robberies has since increased by 19.4 percent over the course of the last week, as compared to the same time last year.

Adams had promised a return to broken-windows policing after winning on a tough-on-crime approach campaign.

‘I don’t know how Mr. Adams is going to do that when the DA is effectively handcuffing the police,’ he said. 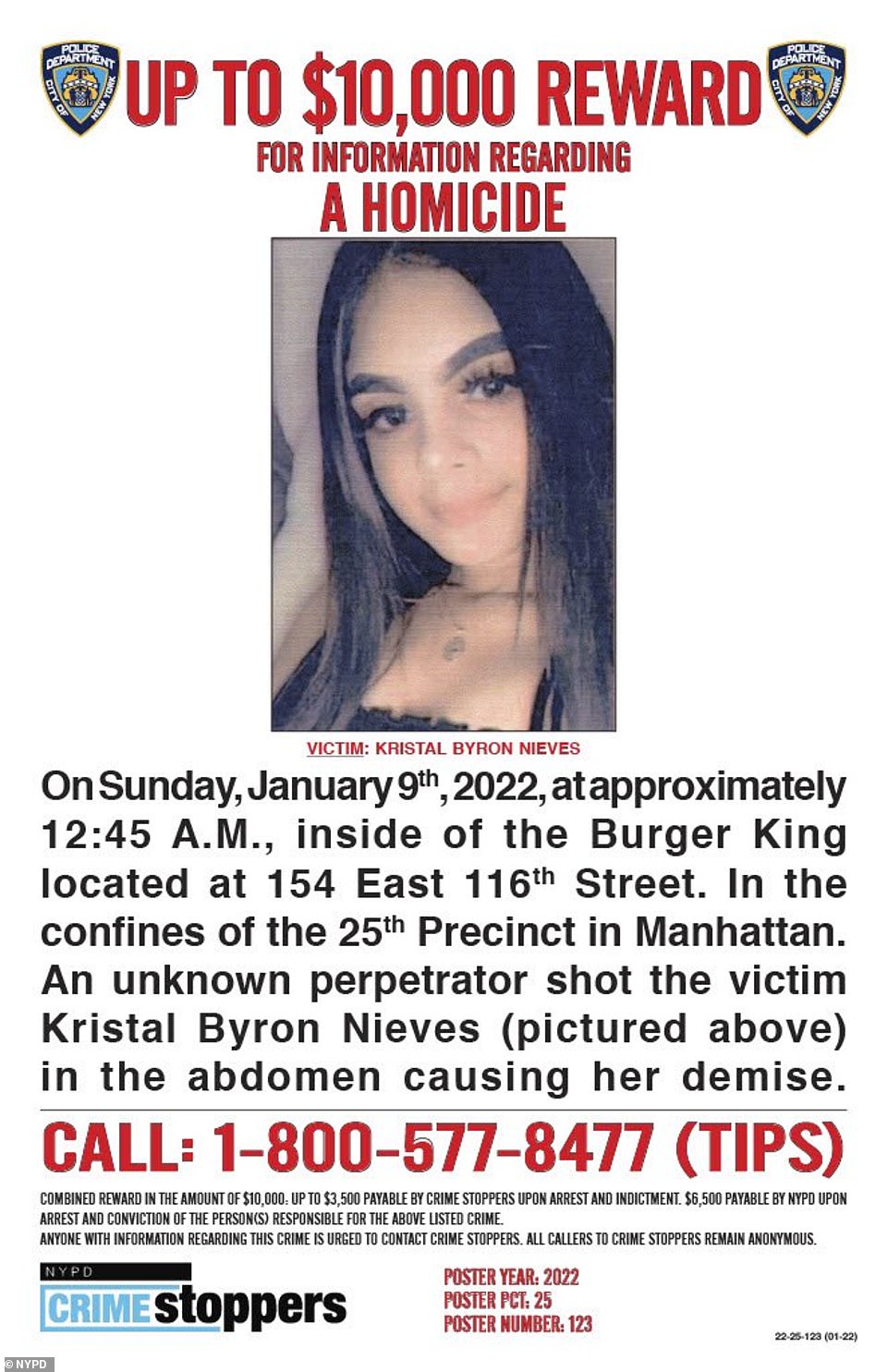 Police offered a $10,000 reward to anyone with information

Her family told the Post that Bayron-Nieves had already requested more security and was planning to move to day shifts after fearing for her safety when leaving work.

‘She is only 19, and she has more than 50 homeless people sleeping in front of the store,’ her mother, Kristie Nieves, 36, said in Spanish through a friend and translator Nathalie Pagan.

Bayron-Nieves had moved to New York from Puerto Rico with her mom and her 14-year-old brother two years ago.

Her mother went on to say she felt particularly torn over her daughter’s death after convincing her to continue going to work despite the teen’s concerns.

Pagan added that Kristal’s mom ‘feels guilty about that. That’s what she tells me earlier, that she feels guilty because she wakes her up to go.’ 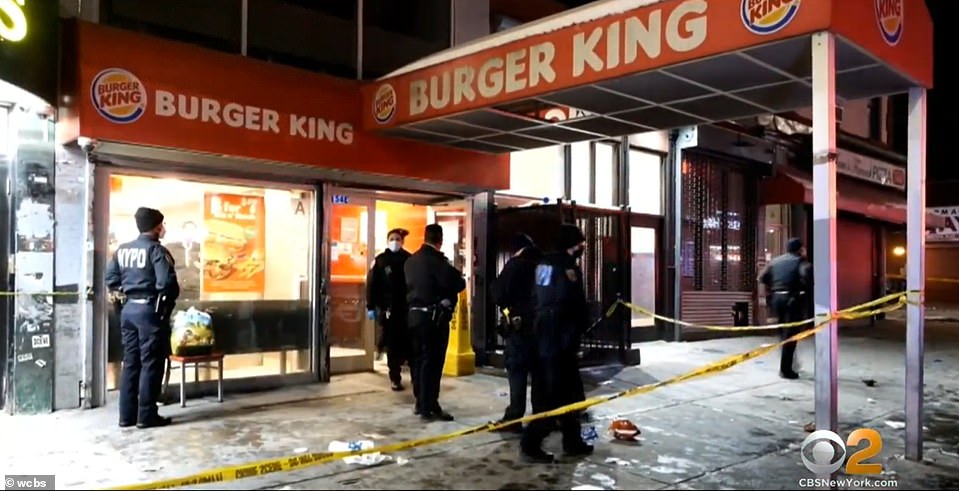 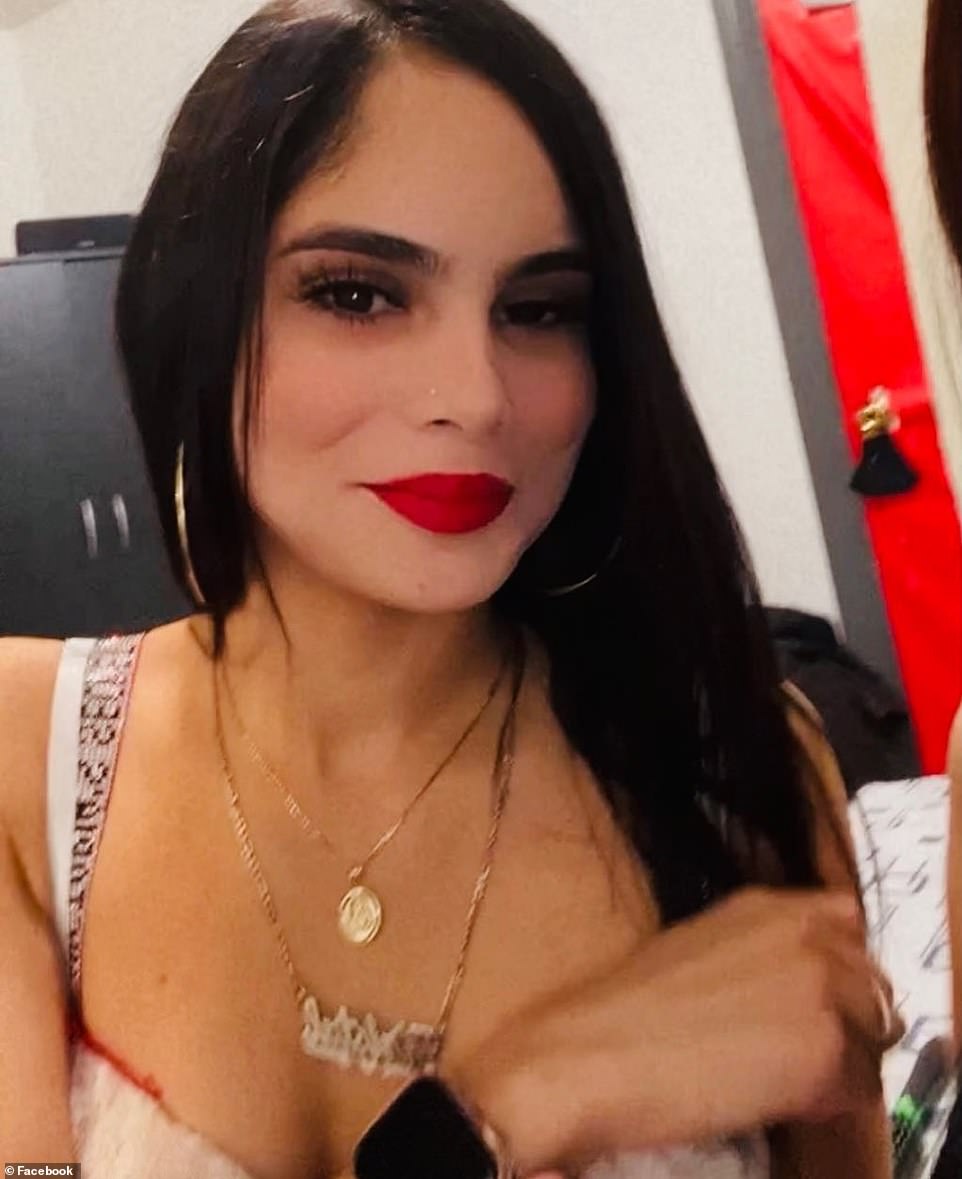 The 19-year-old was afraid to be working nights and had asked to be switched over to the day shift, which was supposed to happen next Friday

According to her family, a young man, who stopped by to see her at the restaurant to bring her a flower almost nightly, was there when she was killed.

‘He told us he was there until her last breath,’ Pagan said.

‘He tells us when he went and walk to the place that he always buy her a flower. He went back, and they open the door to this guy that was dressed like them, in all black.’

Bayron-Nieves reportedly mistook the robber for a delivery man before he punched the restaurant manager and then knocking out the young man there to see her.

Pagan said the teen ultimately gave the thief all the money in the register, about $100 in cash.

‘So (the young man) says that the guy turns around and he comes back and shot her,’ Pagan said.

‘That he turn around like he is going to leave, but he comes back and shoots her.’

‘She’d done everything that he say,’ she said.

‘She give him the money and everything. That she didn’t even do nothing wrong.’ 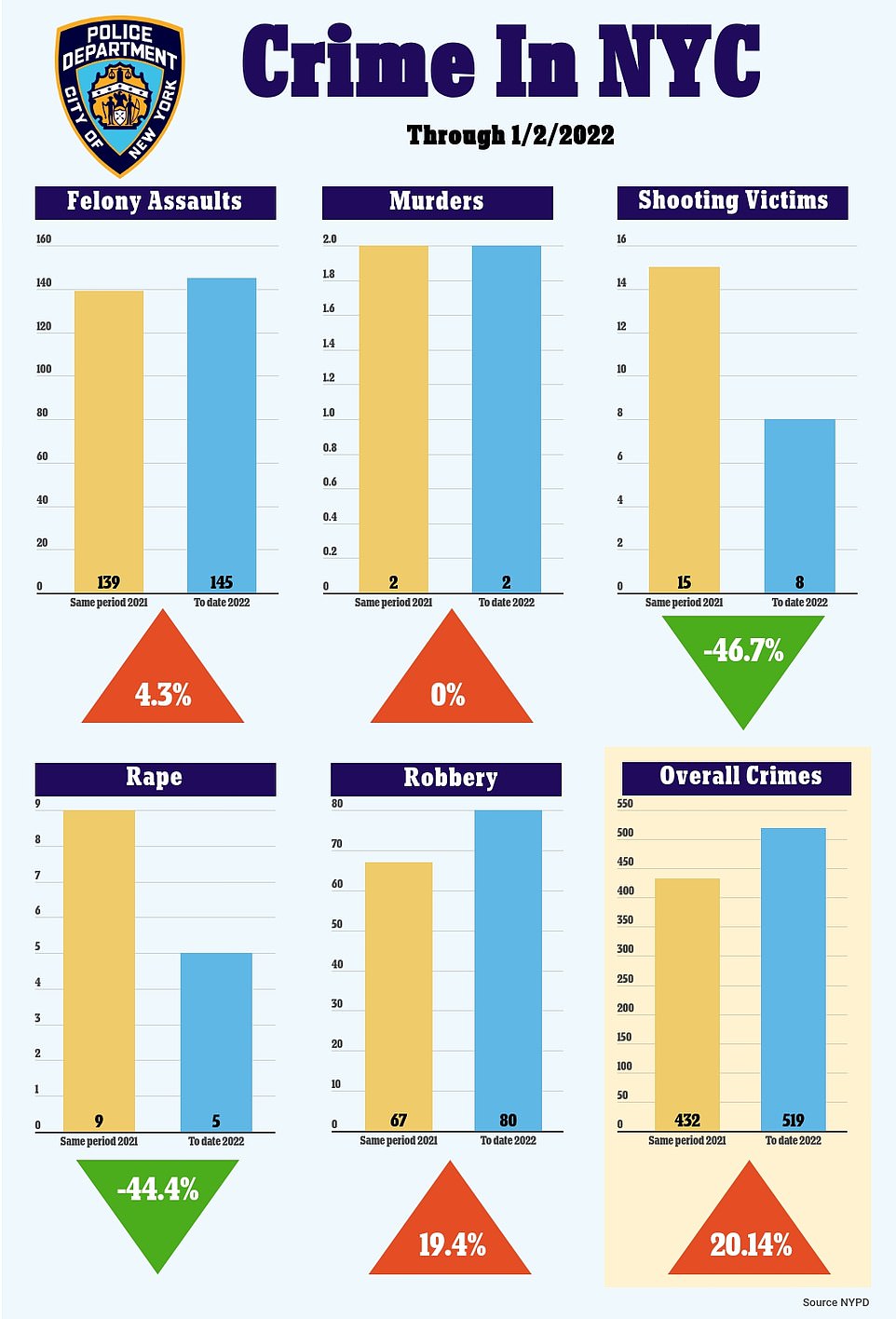 Sunday’s fatal robbery and shooting incident comes as crime continues to surge in NYC with a 19.4 percent increase in robberies reported